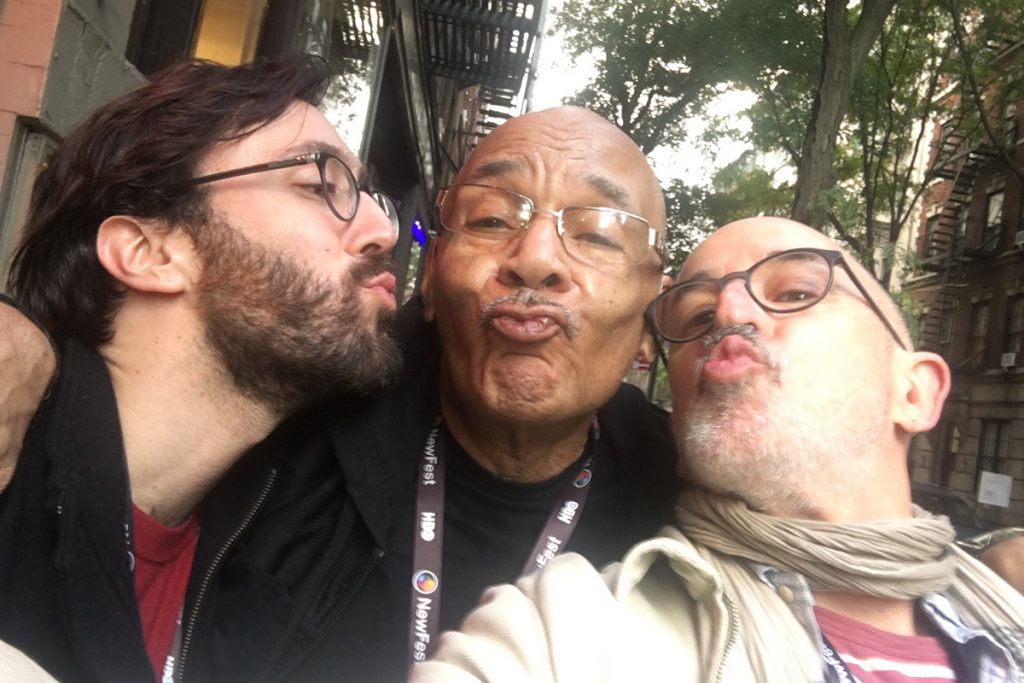 This conversation is part of “Voice Over,” a conversation series featuring interviews with trans and queer filmmakers who reject respectability and embrace the nuances of LGBTQ cinema. Created, produced, and written by Hansen Bursic. You can listen to the full audio of the conversation above. The written conversation below was edited for length and clarity.

As I moved to Los Angeles this year, I couldn’t help but start to feel haunted by anti-aging culture. It permeates this city and it feels especially powerful in queer spaces. Although it doesn’t have a major effect on me personally, it reminded me of conversations I have had with my friend David Weissman, who has made it part of his personal mission to cross intergenerational divides with his films.

In this conversation, I sat down with David, the Emmy nominated documentary director behind We Were Here and The Cockettes (which he co-directed with Bill Weber), to chat about building bridges between older and younger queer men and his latest project Conversations With Gay Elders.

Hansen Bursic: This is such a great conversation that I’ve been really wanting to have. Ever since we met, we’ve been having these really great conversations about intergenerational LGBTQ relationships, whether that’s in the film space or just in general and our conversations were always really fruitful and interesting.

David Weissman: I love my conversations with you. And I’ll just say that when I met you, it was at Frameline. Somebody who was a filmmaker who’s around my age came up to me and said “you have to meet this filmmaker over there.” And that was essentially how this friendship started.

DW: Well, I think for me personally, I mean, all of these things are completely idiosyncratic. The last project I did was called Conversations With Gay Elders, and it was different from the preceding projects substantially in that there was no end product in mind.

The idea was just to start doing it because it needed to be done, and then see where it went. In the beginning, all that I knew was that I wanted to interview gay men about their pre-Stonewall experiences. But then very quickly, I started to realize this process would be enhanced by working with young men as the editors on these and as much as possible on the crews as well, but that was more challenging.

So it wound up being a kind of a whole circular mentoring process where the younger guys were being mentored both by listening to the stories of the elders whose stories they were editing and also by me, but I was also being impacted by what they were bringing from their generational vantage point.

HB: I am so glad you brought up the Gay Elders series in this conversation because I think it’s such a great point about your commitment to this work.

What were some of your experiences working alongside these younger filmmakers? And what did you notice about bringing on younger people to work on a project that is so focused on history, story sharing, and folks who are older?

With my young editors on the Gay Elders project, we would work basically remotely because none of them were in the same town as me. One of the things that I suggested to all of them to do is watch it with their friends, watch it with a couple of people sitting next to you, even if they have nothing useful to say. Their presence will alter your experience of how you see it. But with all of them, that experience of watching it with a peer wound up being very illuminating. And sometimes the peer would say “[this experience] never even occurred to me. I don’t have any older gay people in my life. I’ve never talked to an older gay person.”

I really wanted to give these younger men, who I thought would be interested in this stuff, the opportunity to enter into a world that they might not have an opportunity to enter otherwise. Also, I think with all of them, it was the first time that they would have a full credit as editor instead of as an assistant editor or whatever.

HB: Yeah and, even beyond filmmaking, this idea of intergenerational relationships is something that I think is really, really hard for gay and queer men for a lot of reasons. Were you thinking a lot about that while you were making this piece?

DW: Yeah, and I have to say I’ve struggled with what language to use when I’m talking about this because on some level it sounds like boyfriend or sexual relationships. And really what I’m talking about is a much broader context of how we as gay men of different generations communicate with each other.

When I was making my film We Were Here, which was about the AIDS epidemic, I think it was the first time that I really started to grasp that there were such huge obstacles to gay men of different generations communicating with each other freely and safely. And how important it is—in terms of both the passing on of legacy and lesson and lessons of history—that there be more comfort.

While continuing to be a historian in my filmmaking, I also want to be a facilitator of easier conversations between gay men, just as a political objective.

HB: It’s becoming less revolutionary with visibility and work like yours. But it still feels very revolutionary to have these conversations. I still feel like there’s this invisible unspoken barrier between our generations.

DW: One of the things that I hoped the Gay Elders project might offer the opportunity to do, and it sort of ended prematurely, was for me to start doing work with both college and high school kids around how to speak to and to approach older people while simultaneously talking to older people about how to speak more effectively and more constructively with younger people, which a lot of older people are not very good at. And these are just lessons that we don’t learn in our culture.

I do always try to encourage some of my older friends, particularly older friends who are feeling like they don’t really know what to do with their time, to engage more with younger people. One of those ways is to ask what can you do with your life experience and how can you be of value to people who are younger, regardless of whether they’re queer or whatever. And again, it’s complicated because our culture is so hyper anxious around cross-generational stuff, it’s always a source of some degree of discomfort.

HB: So what advice would you give to younger filmmakers who are curious and want this mentorship?

There’s plenty of people out there who are really wanting to be of service to other filmmakers. It’s a challenging time and it’s also a time full of possibilities. I mean, part of what’s challenging is that there are 25 million documentaries coming out every week because the technology has so enabled inexpensive, high-quality production.

The problem is you still have to learn how to tell stories, and there is a level of maturity in storytelling that grows over one’s lifetime. I mean, I’m a much better storyteller now than I was 10 years ago or 20 years ago.

I think one of the things that I try to impart upon younger people is how important it is to seek community out in whatever way you can find it. Build community, whether it’s with other filmmakers or whatever. Have deeper conversations with your friends, take risks with your friends emotionally. Also, I think it’s worth asking for help. And I think if one asks for help, it’s really important to say thank you. It’s something that I think a lot of people forget.