A Spooky Sit Down with Filmmaker and Performer Knucklehead

A Spooky Sit Down with Filmmaker and Performer Knucklehead 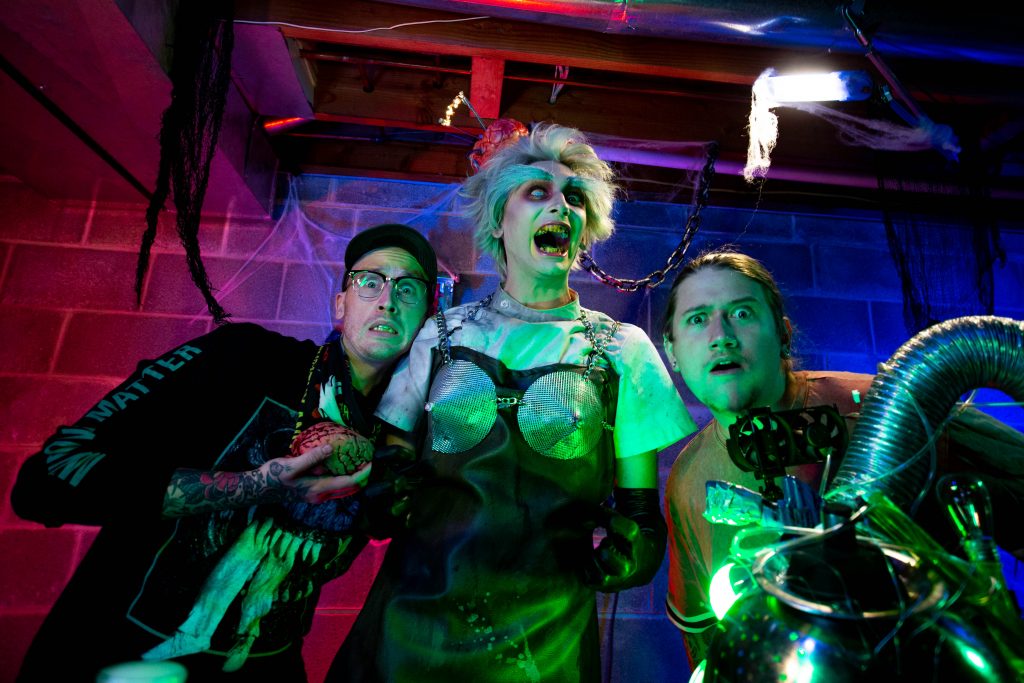 From L to R: Adam Lenhart, Knucklehead (Jake McClellan), and Eric Griffin on the set of ‘HeBGB TV’. Courtesy of McClellan.

This conversation is part of “Voice Over,” a conversation series featuring interviews with trans and queer filmmakers who reject respectability and embrace the nuances of LGBTQ cinema. Created, produced, and written by Hansen Bursic.

Provocative, queer, and… made in Lancaster, PA? In the heart of Central Pennsylvania, filmmaker and performer Jake McClellan, also known as Knucklehead, and close collaborators Adam Lenhart and Eric Griffin, were busy working a spooky passion project: a comedic, Halloween-themed collection of short films with a stunning 1990s broadcast look titled HeBGB TV.

One of the HeBGB TV film team’s most inspired shorts, 1–888–5-BLUE-YOU, saw McClellan play a blue monster who operates a phone sex hotline to make ends meet. In a surprising turn of events for McClellan, the short has seen early success on the film festival circuit, screening at two of the world’s largest LGBTQ film festivals, Outfest and Frameline, this year.

I was fortunate enough to catch up with McClellan earlier this month to chat about the project, his zany nineties inspirations, and what it’s like making gender-bending, queer work in Lancaster.

Hansen Bursic: To start, I want to talk a little bit about your style because I really do love the horror-comedy, camp aesthetic you have. How did you find this style?

Jake McClellan: Yeah, so a lot of this style we’ve been creating has been inspired by children’s television. I’m a millennial and growing up living in rural areas, it’s you and the TV.

We had Scooby-Doo, Courage the Cowardly Dog, and AAAHH!!! Real Monsters. We had Are You Afraid of the Dark, and Goosebumps. We had so much like children’s programming for spooky things.

So inevitably, you know, through just nostalgia and growing up, you latch onto these things. A lot of the things I do come from a mixture of just that kind of spooky television programing.

JM: Actually, this short was kind of created out of a need for a full feature. I was trying to write things that could incorporate these different characters [from HeBGB TV] into the same scene. So I figured it would be perfect if some of our puppets were to call into a hotline and it could be in the same kind of world.

I was like, “Oh, I’ll use my monster girl character and use her” and pull from Up All Night and Scream Line with Linnea Quigley. Everyone had a phone line to call in for [in the nineties], and it’s just a big promotion for movies. So it made sense when you’re making a movie about nineties TV tropes to do a hotline.

A still from the short film ‘1–888-BLUE-YOU,’ courtesy of McClellan.

JM: It’s been really complicated, to be honest. I’ve been struggling with calling myself a drag performer or just a character actor.

I don’t know necessarily how it kind of came through. I just felt like I wanted to put on a nice robe and reenact kind of a phone sex line, but dressed in blue.

And the other thing is when you’re completely covered head to toe in a different color, you feel like a completely different person. I think a lot of other drag performers feel that too when you have a prosthetic on or an ugly wig. Literally, my teeth are covered. Nothing about me is recognizable. There’s a lot of freedom in that.

I’m not trying to communicate anything groundbreaking about, you know, gender or anything about that. She really is just a femme monster.

HB: Let’s talk about bringing the short to Outfest and Frameline. How does it feel to bring this very particular perspective from Lancaster to LA and San Francisco and really the world? And not old Lancaster but this nineties kid, millennial Lancaster where it’s kind of punk and it’s kind of queer.

JM: It does feel new. Like this new generation of people in this Central PA region putting down their roots and saying something but I learned [something else] at Outfest and more specifically from Tiffany Naiman who is the Program Director for the Platinum Showcase. She’s also from Lancaster and I and just learning that there has been a huge punk scene here, even through the eighties and nineties.

When you’re in these very conservative, rural, Christian areas, there’s inevitably going to be a youth response to that, which is usually met with aggression and [results in] fantastic art, music, and visuals. I find it fascinating that it takes kind of that restriction to create that kind of “Fuck you” back to it.

HB: Let’s talk about that, right? What does it look like to make this kind of film in Lancaster?

JM: It’s interesting. I think I’m learning about, through these [HeBGB TV] test screenings, how our community is reacting to it, which has been overwhelmingly positive, which makes me feel good because I really tried to make a film for my community.

It feels interesting, you know? I think a lot of the other films that are successful here are documentaries, are these feel-good stories. [Then there is] us doing campy musical theater and Chicken McNugget-style commercials in our basement. I don’t know. It feels Pennsylvanian in the way that it feels just ridiculous and stupid. Like, I think it comes down to Pennsylvanian humor. We love good wit. We’re a bit abrasive at times. We’re sharp tongue, but we’re also kind of witty in that regard.

HB: In Pittsburgh, we call it jagoff humor! I definitely feel that in your work.

JM: Even just recently, like with Mare of Easttown, there’s this fascination with Lancaster and Lancaster accents, how we talk, how we’re, and how we act. It’s something that they’re trying to bottle up and capture. And I think if anyone’s trying to do it, it should be people actually from Pennsylvania.

This conversation was edited for length and clarity.